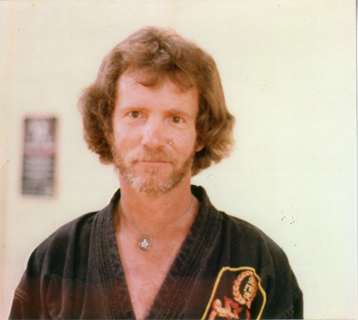 Sensei Putman passed away on Sunday, March 26, 2006. He started training in 1971 in Pine Bluff, Arkansas in Sensei Hardy's first class after Sensei Hardy opened the National Headquarters in Pine Bluff. Sensei Putman, along with Sensei Doyle Rowland and Sensei Ron Turchi, was one of the first three people to receive Black Belts in the Pine Bluff Dojo in 1974. He eventually reached the rank of Sandan and was a member of the Taiho-Ryu Hall-of-Fame. He taught Taiho-Ryu for over 25 years and established several Taiho-Ryu dojos over his teaching career in Arkansas and Louisiana. His wife Sue and children Dale, Mark, and Tina also trained in Taiho-Ryu and Taiho-Ryu literally became Sensei Putman's passion for many years.

Besides contributing to Taiho-Ryu by teaching, Sensei Putman designed the Taiho-Ryu emblem:

Over the years Sensei Putman influenced many lives. Read what some other members of Taiho-Ryu had to say about him:

"Sensei Putman was my first instructor who set the foundation for my training. If it wasn't for his knowledge and the way he presented Taiho-Ryu, I probably would not have continued my training. He was a big inspiration to me, not just in martial arts, but in life itself. He will be greatly missed." — Sensei John Carson

"Sensei Putman both figuratively and literally built Taiho-Ryu into what it is today.  Both Pine Bluff dojos would not exist today had it not been for Sensei Putman, since he coordinated the actual building of both dojo's. Along with his students and the few instructors at that time, our headquarters dojo was built entirely by Taiho-Ryu Students.

Thankfully, we had Sensei Putman as our 'General' contractor who told us all what to do. Students at the time,  Jim Burr (Nidan & 'Plumber'), Garland Derden and family ( Nidan & Electricians), and many others who had special building talents built the Dojos from the ground up.  Without their tireless efforts, Taiho-Ryu might not even exist today since these dedicated instructors and students made sure Taiho-Ryu would always have a permanent home .  Poor Sensei Putman had a few 'laborers' like myself, Sensei Turchi, and Sensei Rowland, who had trouble even drivinng a nail straight. But his patience persisted and the Pine Bluff Dojo, built in 1972, still serves many dedicated students thanks to Sensei Putman and many other outstanding Taiho-Ryu family members.  His legacy lives on and always will!" — Sensei Bo Hardy